Hybrid IT deployments continue to gain favor with CIOs and CTOs, but cloud computing will now drive a greater share of the ongoing investment in business technology. Those combined platforms are enabling digital transformation projects across the globe.

Total spending on IT infrastructure products for deployment in cloud environments reached a total of $46.5 billion in 2017, with year-over-year growth of 20.9 percent, according to the latest worldwide market study by International Data Corporation (IDC).

Public cloud data centers will account for 65.3 percent of this spending, growing at the annual rate of 26.2 percent over the IDC forecast period. 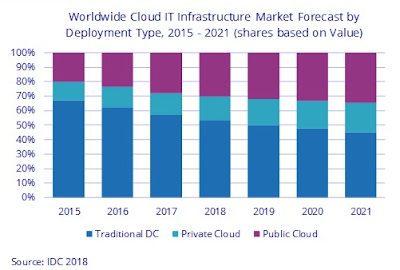 This trend represents a faster share loss than in the previous three years, according to the IDC assessment. Moreover, the growing share of cloud environments in overall spending on IT infrastructure is common across all regions.

In cloud IT environments, spending in all three technology segments is forecast to grow by double-digits in 2017. Ethernet switches and compute platforms will be the fastest growing at 22.2 percent and 22.1 percent, respectively.

Long-term, IDC expects spending on off-premises cloud IT infrastructure will grow at a five-year compound annual growth rate (CAGR) of 12 percent, reaching $51.9 billion in 2021. Public cloud data centres will account for 82.1 percent of this amount growing at a 12.1 percent CAGR while spending on off-premises private cloud infrastructure will increase at a CAGR of 11.7 percent.

"As adoption of public cloud services and private cloud deployments continue to spread around the world replacing traditional on-premises hardware-centric IT settings, overall market spending on servers, storage, and networking will follow this move," said Natalya Yezhkova, research director at IDC. "The industry is getting closer to the point when cloud deployments will account for the majority of spending on IT infrastructure, which will be a major milestone embracing the benefits of service-centric IT."